A Day with a Free Afternoon


I'm sitting in front of my sea-view window, watching my sox dry and listening to the steady crash of surf on the beach, the squeals and shouts of children, the conversations in French passing by, unseen under the window. The day that broke with clear blue skies has a cool dampness to the air now as a thin cloud layer drifts overhead. The sox, washed last night, stubbornly remain damp, while the black pants were dry when I got up this morning and the undies were by mid-morning.

I'm wearing -- waddaya call these shorter pants formerly known as pedal-pushers? -- and sandals for the first time in honor of sunshine and a local walking tour of Saint-Jean-de-Luz not involving scaling heights unsuitable for sandals. However, it's chilly now around my ankles and I've draped them with my parka and wrapped my scarf around my neck to create a warmer coccoon. I will need dry sox before going out again.

Not a few of the beachgoers are topless, to the shock-and-awe of our travelers-for-the-first-time to a French beach. Soon, I'd think, the sun-lovers will be chilled out, too, although I remember from years ago that it's toasty to be crunched into the sand for a long while after the rest of the world feels the coolness.

It was glorious, too, not to have an early rendezvous for today's sightseeing. Not until 9:30, meaning we could stick around for that second of coffee before meeting Iban, our Basque guide for  the past three days. We started today's walking tour of the town outside our hotel door. The sea, which crashes relatively gently on the beach in front of us now, once flooded the city at intervals, wiping out most of the buildings. Thus most construction is "modern" by French standards, with only a few of the old stone buildings, owned by ship owners in the town's whaling era, remaining. Whaling, fishing and pirating were the main enterprises in the town's Basque history. When these sources of income dried up, they sought The New Whale, the tourists who flock to the area, Biarritz, Saint Jean de Luz, San Sebastian and Bilbao.


﻿
The wall in front of the hotel, which looks like a promenade, is actually a seawall, which became clearer farther down the way as we walked. But the main thing which protected the city was the breakwater built from each of the headlands at the entrance to the bay with another portion across the middle of the bay. The beach itself is imported, so to speak, from inland, as the local sand gets washed out to sea. That explains the large equipment that pushes the sand around on the beach each morning.

﻿
(As I write, I decide the sox will get no drier in the damp air from the window. Window closed, heat turned on, sox moved near the vent. There are splashes of raindrops on the window...the beach abandoned except for one bald man in swim trunks running along water's edge. The waves are crashing in hard, swirling sand, carving scallops in the sandy beach, an incoming tide on the day-after full moon. I go out to get a panini across the street. I'm not very hungry and I don't want to walk in the rain with bare ankles and no sox, but I don't want to get stuck with only cough drops for dinner again.)

Iban leads us through the neighborhood, down to the harbor. Once this harbor held a hundred boats. Now it holds precious few. One of the few here is the last of the fishing boats built locally. Notice its pointy stern, unlike most modern boats. It's the anchovy season, so that's what it will be going out for.

We saw the house where Maria Theresa of Spain stayed prior to her marriage to Louis XIV.  And where he stayed in a nearby residence, which was subsequently split in half by the owner who'd fallen on hard times. Part of the house is now the City Hall and it looks like there's either a museum for Louis XIV or it's a Louis the XIV slept here sign.
﻿﻿

He leads us along Boulevard Victor Hugo to the church of Saint John the Baptist, the oldest church in the city.


﻿﻿﻿﻿
﻿
It is Basque, with the galleries around three sides, which accommodate crowds, especially those on  religious holidays. 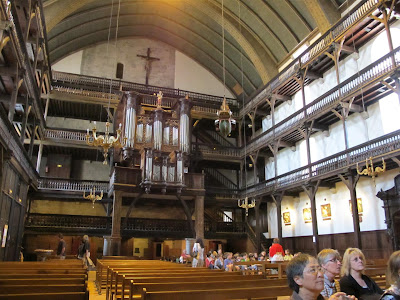 After we finish in the church, it is the end of Iban's stint with us and he bids us farewell with a traditional Basque song and explains that being Basque is speaking the Basque language, no matter your origins. Most Basques in this area of Northern Spain and Southwest France also speak French and Spanish. Basque is unlike either of these or any other language. Au revoir, Iban, the Basque surfer. He was one of the most fun guides ever and we always have very good guides.

(At 9:00 I return to my room from dinner. The panini did not pan out, nor did the rain. I'm over-stuffed. The beach is deserted. I look out again moments later. A woman is seated on a towel (a thin plaid French beach towel we've just learned about today) near water's edge. A man walks into the water up to his waist and begins to swim away. When he comes back and puts on a bright red sweatshirt, I am not fast enough to capture his picture. The light is fading and I can't get the focus-square set to the right distance.)

The rest of the morning involved trains, train tickets, and transportation to trains. Jeanne needs tickets for a visit to Chartes, leaving and returning on Saturday from Paris. Then there's the matter of getting our little group of 18 and our luggage to the train station Friday to transfer to Paris. And I needed to get that ticket from Avignon to Marseille on July 13 for my Provence trip. I was the only one immediately successful, although I was told my credit card wouldn't work. (I got a phone call from my credit card company a couple of hours later. One hopes things are on track now.) As for the other errands, things are still being worked out.

Kathy and I had lunch at a seaside cafe on the boardwalk.

I must not forget to show you this beautiful wisteria tree. It's so large, it takes two photos to display. 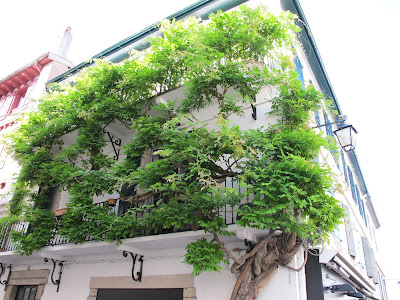 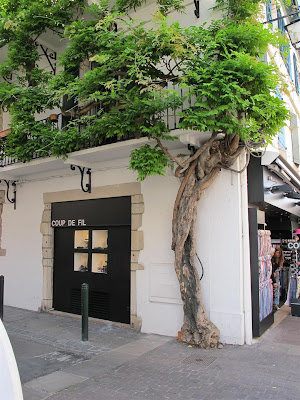 I'll try hard to see you tomorrow.  Depends on when I get my packing done for Friday travel.