I can't help it. Today was hilarious, elements of slapstick, although perhaps only in my mind.

People just weren't willing to believe forecasts of snow. Not here! Not now! Spring has Sprung.

Smirk. I open an eyeball this morning to see mammoth snow flakes pelting down outside the window. There'd been a real chill in the air during the last half of my walk in downtown yesterday, foreshadowing colder times.

(Aside. Relatively few snow photos hit Facebook, but there were lots of comments about the weather. You just know this is gonna happen. I don't plan to spare you here.) 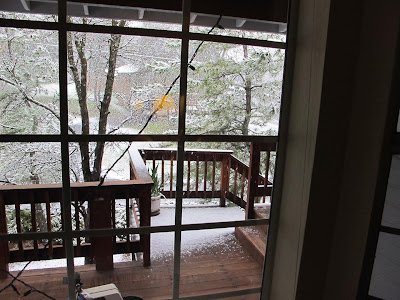 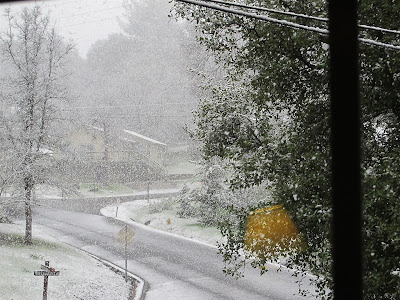 Last time this happened, The Little House called to cancel lunch, and all activities including our NeedleCrafts. This time, would they or wouldn't they?

So I took my phone to the shower, just in case. It rang but it was Terri, not The Little House. Her steep driveway was almost to the impassable stage. She'd try to get out for lunch if the snow let up. I left her with a vision of me sitting all by myself in the craft room.

Although snow was sticking pretty well, the roads weren't bad by the time I headed out. The first gratifying sight at The Little House was the open gate, followed by a set of tire tracks in the snow, heading in. I parked. There was a single inward-bound set of footprints. The door was locked but B let me in when I knocked. She'd headed down early from her home higher up to get out before she got snowed in.

"Yes," she said, someone had left for the little city down the hill to pick up our lunches.

I tried calling Terri. Busy. Redialed and told her we were here and lunch was coming. She'd just gotten off the phone with someone who'd called her and said lunch was cancelled. Just then, Rose arrived, who comes farthest from up in the mountains, where it snows seriously and the power goes out for long stretches.

Terri rolled in not too much later.

The computer users group board meeting was on my afternoon calendar. Sometimes in the interim between crafts and CUG I read my Kindle in the park or library but this wasn't much of a park day, so I went home for the hour or so, then headed back to town for the meeting. Me and the guys. It's been several years since any other women have been on this board. Pondering that. I think those we had were more focused career women who didn't have the luxury of time to spend hashing over this and that about computers, which is kinda the fun of it all.

Whereas I've been retired . . . forever.

One of the guys was late for the meeting.  Watching the Masters.  Golf?  Hard to imagine someone somewhere was playing golf.  We finally fled the board room when the snowfall became copious once again. 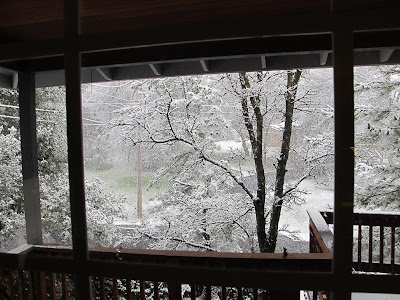 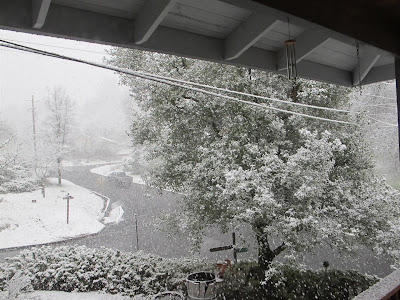 Meanwhile, snow on Altamont Pass was bringing commute traffic to a stand still. Thunder. Lightning. Hail. Sleet. No doubt rain. Tornado. Spread between us and the Bay area.

I'm sorry that the snow is an inconvenience, and even a hazard, to those who have to be out in it. But I just love it. And we have quilt camp coming up before long, and it always snows for quilt camp.