Good grief! I've been so busy today that I just noticed I haven't taken my after breakfast pills, let alone my after dinner pills, and it's almost time for my before bedtime pills.

But I feel good because, for starters, I finished up my own little pocket itinerary for Jeanne's Fun in Southwestern France tour. It's a customized version of the one's I did for the other tour participants.  I had to renumber my pages to fit them in their proper place, print the custom pages, slice and assemble. It's sitting in my car now for a trip to Staples to be spiral-bound.

(Excuse me, but I have a little gray cat on my lap that wants cuddling while I'm trying to persuade him that if he just sits quietly I can type around him. He's not sleeping. He's very attentively staring ... somewhere. I've no idea what's drawn his interest.)

Furthermore, I started a calendar for the trip to Provence later in the summer that Sister and I are going on. I'll be going to a French language school after she and I finish up a photo tour. I have only one more reservation to make for a train ticket, and I'm pondering high cost, early-purchase-in-the-US certainty vs. buying it in France when I'm there on Jeanne's tour. All I have are a series of emails and a recently received daily itinerary from the photo tour, with nothing gathered in one place. This calendar will be the basis for a new pocket itinerary. When I'm just doing it for myself, I can take a much more casual approach than when I made them for 20 people. I'd love to work full blast on this, but there are other things that have to come first, such as getting ready for quilt camp.

Just a comment about how annoying I find it is to work with Microsoft Word 2007. I've really been taking a shot at learning Word because it's the common currency these days among people I need to share with. But I downloaded a 2011 calendar in a monthly format. I need only two months for the project and fought with Word to delete the unneeded months. I fought with it to make a colored background in some of the date cells. I read help files, and was denied access to help files for the color fill problem. I gave up, opened it from Lotus Word Pro, and zipped through those problems and have it set up to put in the planned activities. Word Pro is legacy software now. IBM supported it for awhile, but there is no support now as far as I know, except from its almost-cultish devotées' forums. I'd been warned that it couldn't be installed on a 64-bit computer, but I read until I found out how to do it.

The transition to 64-bit Windows 7 computers has been interesting going when trying to get older applications to work. And all you Apple/Mac people, my security software periodically tells me I need to download a new iTunes and Quick Time to solve a security vulnerability. That's a fairly large file and it has been chugging away on my laptop for awhile. I apparently need it to add things to my iPod. (Is that what I have? Those little things with the music on them? It doesn't get a lot of use because the little ear bud speakers fall out of my ears and big headphones hurt and aren't compact enough for travel!)

And . . . I got out for my walk. It was beautiful, although with a chill wind gusting. (Another cat is helping and left in a huff when I lifted her off my keyboard.) It even felt good to walk. I started photographing the variety of house signs that people have along my route, but my camera battery went low, so had to conserve. The injured oak provides a different look against blue sky in contrast to gray. 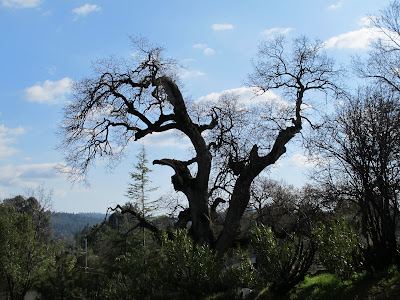 Again, as I had seen on an earlier Sunday, men stood around in front of garages, drinking beer and shooting the breeze. I'd love to take their picture. Quintessential men at leisure? I didn't have the nerve to ask. Maybe next time. I did find Man at Work and took his picture because I know him. I missed his triumphant pose as he held the pieces up for display. 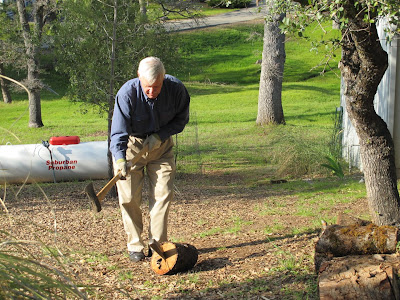 I took a picture of First Flower of Spring in its native setting, which turned out to be out of focus.  Too late to go back.  I had deadheaded all the daffodils, and took the hearty little one in the house before I discovered the photo problem.  A gray kitty paw reaches out to snag it. 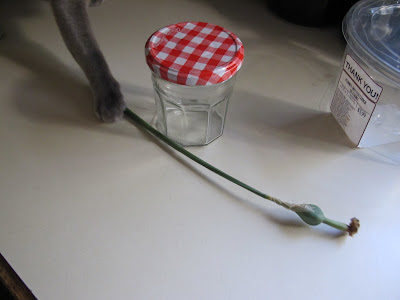 Which reminds me that the real start to the day was an ant attack on the cat food and water in the kitten room. That's cleaned up for now but I'll probably need to get Pest Control Guy under the house to track a nest.

Tonight I made Huevos Rancheros for dinner. I notice my food presentation isn't too appealing, but it did taste good. 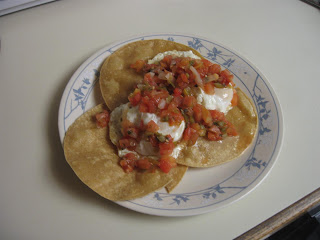 I've shut down my laptop which I recharged, iTuned and updated for quilt camp. I decided I love my laptop (for a laptop) because it has a non-reflective screen. I don't understand why all the manufacturers are putting those glossy screens on their machines. My laptop's disadvantage is that the card slot for photos doesn't work properly, so I have to take camera cables along.  The mini's card slot works fine.

All in all, a satisfying day.