Explosions and Other Miscellany

Ants, ants ants. Again. An ant attack from a third direction. Source again unknown. First it was in the kitten food in the kitten room, about a week-and-a-half ago. I tracked them to a window, but no sign outside the window. Next, in my office. Someone had upchucked cat food while I was away at quilt camp. All dried out, not too nasty, but attacked by ants. They tracked back to the heater vent, but I think they would have been cooked if they came through it. I'm guessing they came up the outside of the heating duct. This morning, ants in the cat food bowl in the laundry room. I absolutely could not track that one down. I don't want the in-the-house pest spray. It's too stressful on Chloe to dislocate her, but I'm thinking it's time to go under the house . . .

Jean-Luc as I see him when I emerge from the shower in the morning. He thinks he's hidden.

﻿ ﻿
It was a loud crack! with the quality of a .22 rifle being discharged right behind me.  The more sensible course of action might have been to hit the deck, but instead, I leaped up from my chair to look into the kitchen to see what the cats have done now. No cats, no signs of disturbance. Something similar had sounded a time or two just before leaving for quilt camp, and while away I'd read that residents in the county had been startled by a loud noise and it was being hypothesized that it was a sonic boom. I didn't think the time of day had been right, but my mind rambled off on the quality of sonic booms, which I didn't equate with .22 rifles at close proximity at all, and tried to remember whether I knew what aircraft it was that was used in a test of the effects of repeated sonic booms on a civilian population whose pathway I lived under in the early 1960s ... that was an interesting experience.

I have two giant speaker cabinets housing 15-inch JB Lansing speakers, venerable old speakers, also hanging around since the 60s but supplanted by my petite surround sound system. My husband installed a weather system many years ago and the little display console sits on top on one of the JBLs.  Henley and Jean-Luc were up there nosing around the little console as if chasing something. They refused to be shoo-ed away. I saw something protruding from the side of the console. It was the 9-volt battery which had EXPLODED, spraying whatever it is inside batteries against the side of a bookcase.

I extracted the blasted battery with pliers, hoping the cord that goes into the side of the console isn't a power cord. I don't know what powers it, because it didn't lose its data accumulation when the battery was out. Now that I reflect on it, there were two blast patterns on the bookcase. Might the battery have exploded in two stages, before when I heard the earlier "shot?" It's unclear, because I had other 9-volt batteries go out, even oozing ones, over the past few days but no reason to connect it to a sound.

I dropped by the storage shed to put the big blue box with my quilt projects away and discovered an unknown padlock on the door. The unit is a big space that has been subdivided into three smaller units and now I couldn't get in! I didn't have the phone number with me, so raced home to make a call. It only took about five minutes to remedy the problem; I've got my own key now to the outside lock and some new unit-mates. There's a spooky serenade in there by the beeps of dying batteries in fire detectors up and down the row.

The suitcases didn't really get unpacked, but I stuffed them in the closet so my house cleaner could move about the premises. If I could get packed before the trip, like, way before the trip, I could do that mythical thing ... take it easy for the few days before the trip and travel rested. Hahahaha.

The first night of the late-to-beds at quilt camp, none of us had a flashlight, and despite a large waxing moon, it didn't illuminate the corridors, so there were collisions among us as we felt our way along. I tried to get a squint at my name on my door so there'd be no surprises. Next night I had my little travel/beside-the-bed flashlight, which gave off a pale triangle of light about 4 inches across by the time it hit the ground, compared to Jeanne's brilliant Leatherman. I changed batteries for the next night which only marginally improved the light output. Last night I tried to turn it on and -- nothing. Changed batteries again. Still nothing. I covet that Leatherman but it's really too heavy for non automotive travel.

I've run out of steam, so I'll just share pictures with you of Terri on the log, Black Kitty inspecting the log pile, and Little Kitty Girl lingering at some distance, brought closer by the miracle of magnification. 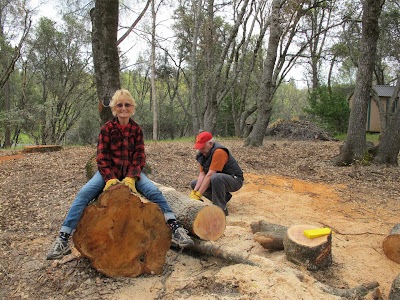 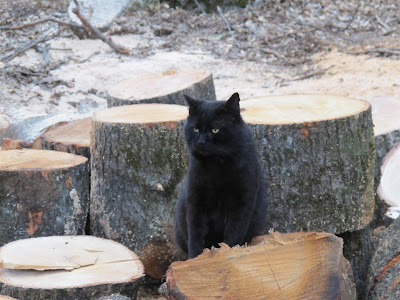 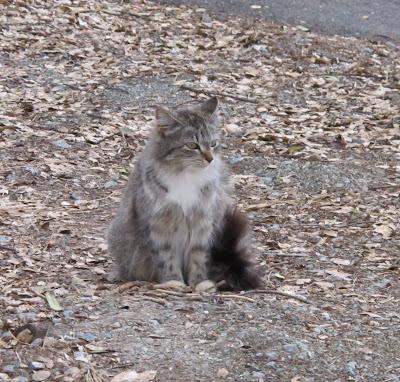