I need one, or I'll forget what I need to do. Now where did I put it?

It's nice to be able to check off the completed tasks. In no particular order:

*   My customized version of the Pocket Itinerary for the trip to SW France with Jeanne is spiral-bound and ready-to-go. The clerk at Staples didn't want to do it before "tomorrow" but I balked. She, or whoever, did a really good job on it. Always on tenterhooks. Jumped for joy that the project is done, a rather disproportionate response but heartfelt.

*   Launched the Electronic Funds Transfer of tuition to French language school for later in the summer. What a unfavorable time to convert dollars to euros! But next week could be worse. I asked the phone guy at the trading firm for his prediction. We agreed that he probably wouldn't be working as a phone guy if he knew the answer to that. Today the money was debited from my account so I know it's proceeding.

*   Went to the elementary school on Monday at the appointed time to help set up for the Family Wellness Faire on Tuesday. The early crew who had marked out spots for each exhibitor had already done quite a bit of additional work. I'm not sure whether these guys were waiting for assignments or had already done their thing. 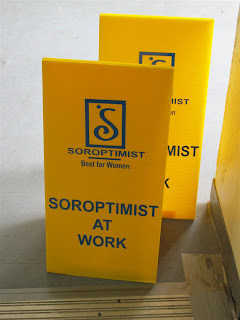 *   Setting up the spaces 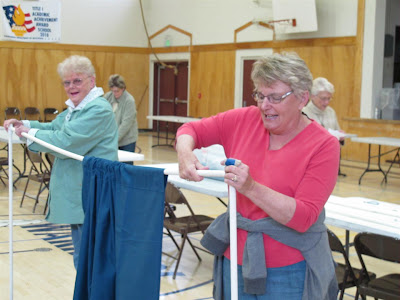 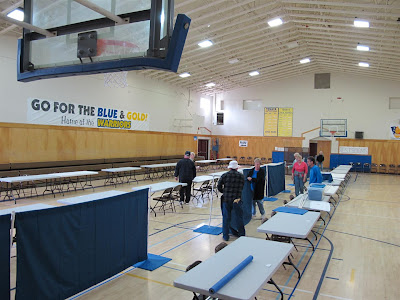 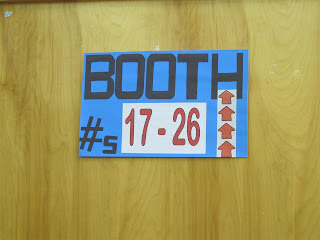 ﻿ ﻿﻿ ﻿
A soft green spring coat is beginning to wrap the injured oak. 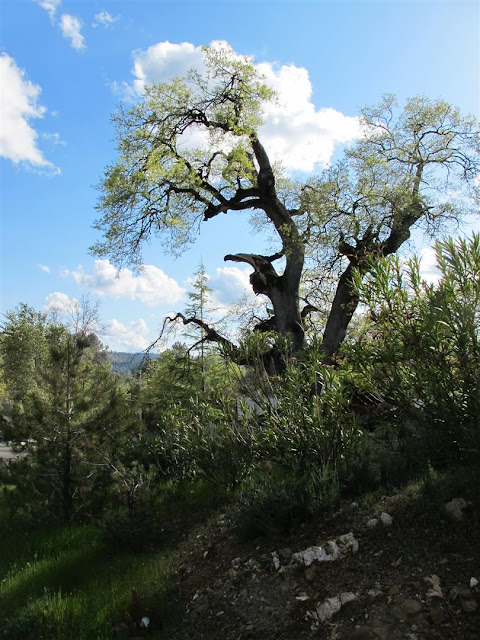 *   Despite being a chronic late-nighter, managed to get to the school before 7 a.m. for Family Wellness Faire, but not without nightmares. My cell phone is my alarm clock and I dreamed I reached over to look at it and it was smashed. It obviously wouldn't wake me up, so I sent my husband (who passed away years ago) out into the dark to find a new cell phone on time. When my old cell phone woke me up at 5:15, I was greatly relieved. 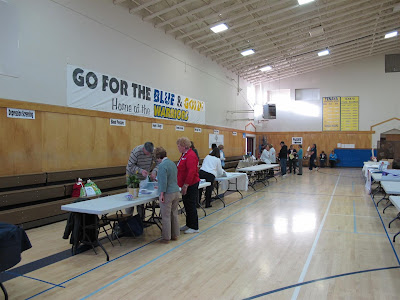 ﻿ ﻿﻿ ﻿﻿
*  Went down the hill after the Wellness Faire for shopping and a French class. We'd each selected a French song and were to comment on why we liked it and what new grammar we'd learned in the lyrics. I chose a song with a bouncy melody that was first on a CD collection a friend had given me. It had taken a bit of listening to discern enough words to get the French lyrics by Googling. I'm not sure whether the prof was hinting that the singer and song were noted for being a bit on the "rascally" side.

*   Just so today wasn't a complete loss, finished up my daily pill packets for the trip. And a nap. I need a nap now and then to make up for the late nights.