Still struggling with the Internet, but had a glimmer of hope this afternoon. I don't bug them. (At least, I don't think I do.) After all, we've been surrounded by days-long power outages, even closing down Yosemite, so no surprise that the local cable/internet system has been impacted.  But I called to follow up with my repeated overnight no-Internet situation, even after the boss spent over two hours up the pole outside of my house a couple of days ago.

The gal whom I'd reported the overnight-outage problem to earlier didn't pick up the call. One of the field guys did. (Rats! Do I have to explain what's happening again?) He excused himself to go to a monitor, then the boss came on the line. He'd just rebooted the entire system, following upgrades they'd been doing along with weather-damage repairs, and, he hoped, it would be coming up faster and better. He was heading up to our little town shortly.

Not long after we hung up, high winds hit, trees were flailing, rain swirled. We're being slammed. Oh, oh, I thought. Here it goes again.

Given the forecast and the intermittent rain that was falling this morning, Tory predicted that she and I would be the only ones at NeedleCrafts today. Surprise! One of our people had surgery yesterday and was due to be released from hospital later today, another had a houseguest who'd been displaced by the power outage, so they were excused. But the everyone else showed up. 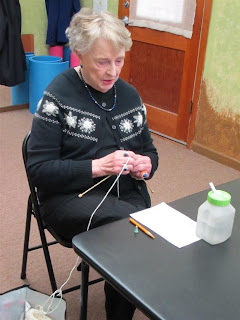 Phyllis just isn't bothered by a little rain. She's knitting a sampler afghan, here beginning one of the little rectangles she'll put together into a big afghan, which she plans to put a backing on. 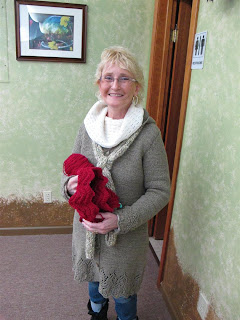 Terri slipped and fell while bringing in her trash cans this morning, but came to NeedleCrafts anyway. And borrowed Aleve. Progress on her red afghan is, well, not very fast. She doesn't work on it at home and thinks she might not be able to talk and crochet at the same time. (Compare photo with previous Thursdays'.) 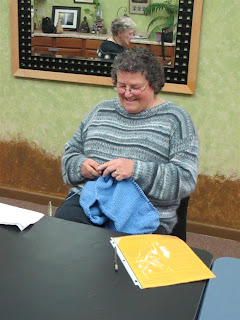 Rose lives way off in the forest up toward Yosemite, where her power has been out since Sunday, so she wanted to go somewhere warm and light and serving food, with people to talk to, even if she might not be able to make it home afterward. She hasn't been able to knit at home because she's been wrapped in a blanket with two cats on her lap. 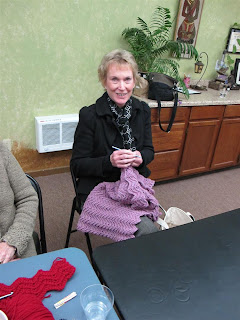 Tory had to work today, so slipped in a little late and out a little early. I don't want to make comparisons, but how long ago was it that Tory had a giant zig zag afghan in another color she was working on, as opposed to someone else, who's  been on a red during the same time? She does crochet at home.


Me? I made the brilliant calculation that we would have a window in the weather to get in and out of The Little House. For once, I was right. Oh, and I haven't mastered that self-photo stuff the kids all seem to be able to do.


After my phone call to the my Internet guy, I stared morosely at my unconnected computer. I thought of opening Turbo Tax but remembered that last image before I closed it last night:

It's not the final word. I'm dismayed that it's the early word. I think it's time to search for a misplaced decimal point. But I was already tired and the thought of tackling that this afternoon made me think "nap." So I joined two sleeping cats on the bed. Or tried to. I was curled up on my side when one cat began to wander along my side, like a hiker along the top of a ridge, while the other little monster began chewing on my toes.
So I'm sleepy again now.