A Tear for A Tree

Remember back in February, when a heavy snow brought down a lot of trees in our little town? When my Tree Guy came right away to clear my driveway, and later to begin cleaning up the mess?
﻿
﻿
We left the remainder of the work until after I returned from visiting my son and family. Well, Tree Guy and crew returned today to finish up. The bobcat was here to lift the heavy oak logs. I originally intended to let him take them away, but I have a few friends who are interested in splitting some for firewood. 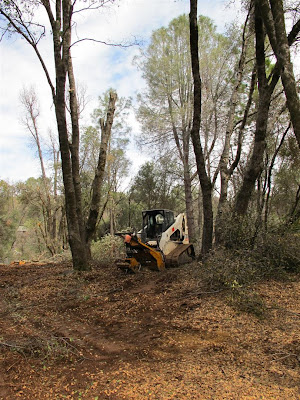 Then there was my bull pine. I may be the only person in California who loves the bull pines, with their grayish needles and their lanky branching. I had one bull pine, unfortunately having begun its life under the canopy of oak, wending its way upward, skinny and tall, through the branches of oak, seeking its own light.

See it there? It's reddish trunk not far to the left rear of the trailer? With its close-up so you can see its top finally beginning to reach above the surrounding oaks? 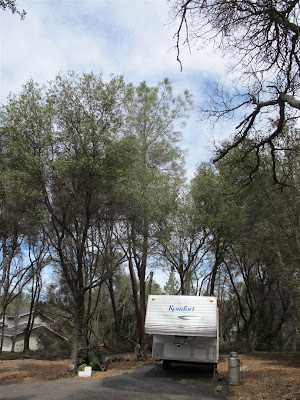 But then there's this side view. It has worried me for years, fearing it would topple over on the trailer in the winds that swayed it. 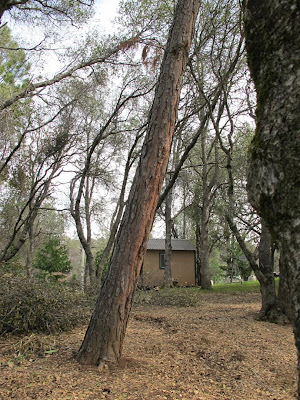 Then just this past weekend, I saw a huge bull pine down over near Sister's house. It had, strangely enough, fallen uphill, where it did damage a fence, but, had it fallen the other way, it would have gotten a house.

On the same day, my friend Terri (of red zigzag afghan fame here) posted this picture of her husband on Facebook, at the root-ball of a 180-foot bull pine that had fallen just off their property at the bottom of the hill. 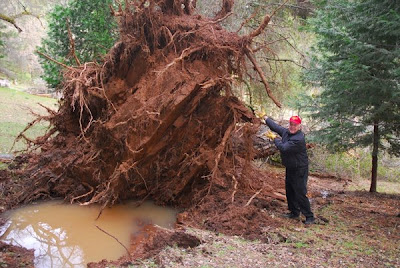 My confidence cracked and I had Tree Guy take my bull pine out. Tonight I weep for my tree. (Yes. I cry for trees, too.)
﻿ ﻿By late afternoon, logs were stacked and slash had been taken to the community compost pile. It looks very clean and orderly out there now, almost park-like. 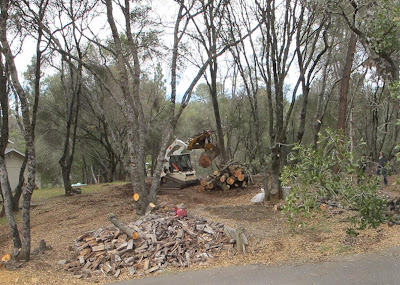 I hate to see any of those old oaks go down. But I also remember something from way back when I was a pregnant young wife and my husband came home from a meeting, having walked through the park on a windy night. He was ghostly pale and in tears. A branch had fallen from an oak and broken the neck of and killed a young boy, whom my husband discovered there. As much as I love the trees, I respect that a falling branch is not a trivial matter.

There is a big hunk of oak in that pile that someone who is so inclined might use to make a coffee table top or something artistic. Anybody interested?