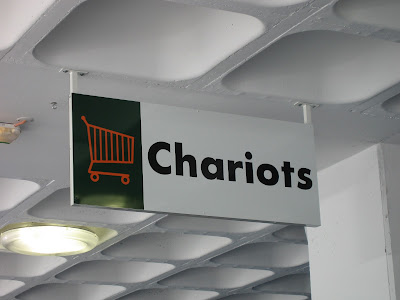 ﻿
"Chariots. That's what at least some of the French call shopping carts. Either that or this shopping center has placed a fanciful sign at its cart-parking. It brings a smile to my face whenever I look at this picture.
I did a big Costco shopping last month, but a new coupon book arrived the day after. With the lure of buying 84 pounds of My Favorite Kitty Litter for 17 bucks, I swung into a freeway-friendly Costco on my way back from the coast yesterday. Kitty litter is usually in some corner along the wall. I did two circuits of the perimeter, tossing another hundred-and-fifty bucks of small light-weight items into the basket as I searched. (You know how that happens at Costco.)
I finally found a store guy I could ask and he waved his hand in the general direction of the wall on the other side of the store. Where I'd been at least twice. He finally strode off to show me, with me at a dead run, pulling my cart and ramming shoppers and carts right and left in an effort to keep up with him. His description was still, "on the other side of the stacks of dog food" when he abandoned me.
Anything pettish still eluded me as I headed out on my own again, but I came across a woman dispensing dog food samples. Really? Can that be true? A nice taste of dog food? I'd been ready to decline a taste of whatever it was on the grounds that my pets are all cats. She thought maybe kitty litter was on the other side of the cat food. Back there, quite the opposite of the other side of the dog food. Well, I finally found great mounds of bags of My Favorite Kitty Litter. On one of those center-of-the-store islands.
These are 42 pound bags, mind you. I know from weighing my suitcase before flying that the most I can lift is 37 pounds. The best I could do here was roll a couple of bags off the stack into the front of my cart.
Physics Lesson
Although the cart took some effort to shove around the store, I didn't discover the big problem until I got into the big outdoors on non-level ground, i.e., hit the street with a bit of momentum. I was parked several rows away from the entrance with access either up the traveled portion of the roadway, or up a cement path next to the roadway. I chose the pathway, up hill but fairly level from side-to-side, so still not a problem. What I thought were pedestrian crossings marked on the road turned out to be big wide speed bumps and there was no exit from the pathway at those points, until it ended past my row.
The minute I came back down the road and tried to push the cart over the speed bump, it headed the direction of the road drainage, into the curb at the end of the speed bump. With 84+ pounds right over the swiveling front wheels, there was no pulling it back, no turning it in the direction I wanted to go. Every attempt landed me with the the cart heading downhill, back in the drainage area.
Eventually I pulled it out from the front and towed it to my car. Got MFKL out of the cart and barely into the car by a sort of reverse roll and dump, and out of the car at home in a similar manner. All I have to say is that three cats use a lot of kitty litter, leading to this sort of chariot mishap. Phew.

P.S. regarding this French mall near Aix-en-Provence, the chariots were used throughout the mall, not just in the grocery store. Nice for not having to run packages back to the car during a shopping spree, or, in the case of our quilter shoppers, bags of fabric from the quilt store to the bus, since it was locked during our visit there.