I knew the kittens would be in the middle of things while I tried to stick several sets of two 8½" X 11" photos back-to-back with spray adhesive. I had only to spread out newspapers on the sink board (that's my oldy mental term for kitchen counter), and set out a box which I hoped would create a guide to line up the pages neatly along two edges, and thus the entire page, when both cats began prowling around on the newspaper. (Just like Henley thinks right now that walking on the keyboard is helpful.)

I grabbed a cat under each arm and marched back to quarantine them in the bedroom. I hadn't prepared for this march. Silly me. I was able to kick the doorstopper that keeps them from closing themselves into the room out of the way okay, but my pj's, draped from the top corner of the door to air before tucking under my pillow, needed a hand to remove. Both boys escaped me and were out the door before I could close it.

I was in hurry. I had a nail appointment and I wanted to be done with spray adhesives before getting spiffy new nail gloss. They were in more of a mood for a merry chase, but got grabbed by the scruffs of their necks, mama-cat style, and tossed into the room with the door slammed behind them.

This spray project teetered on the edge of disaster throughout. Not fun to align the photos with high tack adhesive snatching them together as my shaky hands tried to close the distance. The box might have worked if it weren't cardboard that created its own sticking problems. And if I weren't so shaky. I even put one set together with the ends reversed. It was a tussle, but I got them apart and together again, apparently successfully.

I left the sets stacked between slices of wax paper with a light weight on top to dry, and headed for the bedroom to do a couple more dirty chores before the new nails.

But not to worry. It's just one of those with the little push button beside the handle. 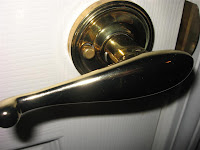 There's a little hole opposite. 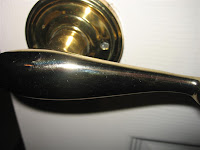 I remembered some kind of metal doohicky designed for the purpose of unlocking, but I think that one was from a home over 20 years ago. If I had one here, who knew where it might be? I fetched an icepick. The angle was okay, but the effect was nada, null, immobile. Little paws were poking under the door.

Thinking maybe the icepick wasn't fat enough and flat enough, I created a fat, flat, short pusher by taping three square toothpicks together and cutting off the pointy ends. Nope. Little fingers of panic began to insinuate themselves into my innards. Kick the door? Disassemble that thing that holds the handle in? Call the fire department, discreetly, please no sirens? Who knows how long a locksmith would take to get here and wasn't that overkill? And that nail appointment was approaching.

I shined a flashlight in the little hole on an open door that I could practice on. It looked like there is a straight ridge, like staring straight on at the blade of a screwdriver. And it also indicated that turning, rather than pushing, was the key to the problem. (Oh, that was really unintentional.)

I went into the vastness of the tool box drawers, focusing on screwdrivers, and whether there is such a thing as a reverse screwdriver -- a notched device that would fit over the blade-like thing. The clock was ticking. Would a small-enough screwdriver fit in the hole and could I get enough "twist" on it?

Hooray! The tiny screwdriver worked on the test door. Back to the bedroom, twist. Nothing. Maybe this is unidirectional? Twist the other way. And success. Two kitties were sitting on the cedar chest next to the door, looking at me with "what's up?" in their eyes.

Outside the manicurist's window, I stared at pink blossoms on a tree, trying to figure if there was any angle I could get on it that didn't feature a few ugly items. I couldn't. It had been touched by frost, but this little stick tree is still a pretty sign of spring. 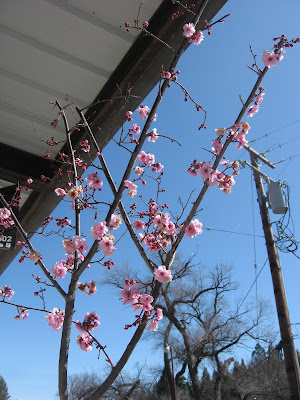 P.S. It was a wise thought to do the spraying before having the nails done.