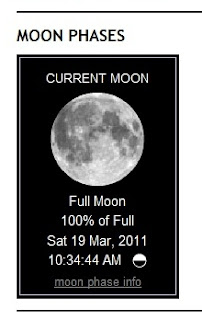 Is it the full moon that accounts for what's happening?

Here's something I heard on CNN yesterday. It might have been the weather guy. The video showed tidal waters in the streets of a Japanese city as a result of this closest pass of the moon to the earth. I heard "mega-moon" applied to it elsewhere. He said then that as a result of the 9.0 quake, Japan had sunk a little. On a later report, he or another reporter said that Japan is 8 feet closer to the US and 3 feet lower. He did not, at this point, add whether all of this was as a result of the quake. Amazing.

My Internet was out all night, starting before dinner. It came back earlier this morning but now both it and cable TV are out. Suddenly. (I'm still the lady with the A/B switch, but broadcast fare on Saturday a.m.'s runs to cartoons or cooking shows.) It popped out just as the update on Japan began, with news of a significant aftershock. Phew.

Yesterday morning, Black Kitty appeared for the first time since I got back from my trip. I went to get him some food and when I returned to the door, he'd disappeared. Weird. When I called him, a commotion erupted and he streaked across my driveway to dive under the trailer, with the neighbor's hunting dog in hot pursuit. At the same time, Little Girl Kitty scurried up the tree (what's left of it) beside my deck.

I hollered and the dog broke off the chase and disappeared. Dogs are not allowed to run loose here and it annoys me (have I said this before?) that it eats the outside cats' food and now I hear from Angie that she keeps stepping in dog poop while she works in my yard.

I coaxed the kitties back for their food and Black Kitty stood nervous watch for the dog while Little Kitty Girl ate. 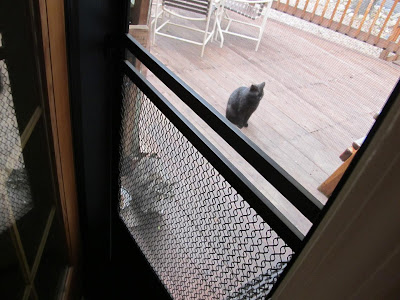 After the previous warning of huge snowfalls in California failed to materialize in our nice little town, we were skeptical about forecasts for snow at our elevation this time. But wadda-ya-know, a little after 5 p.m. I looked out to see this. 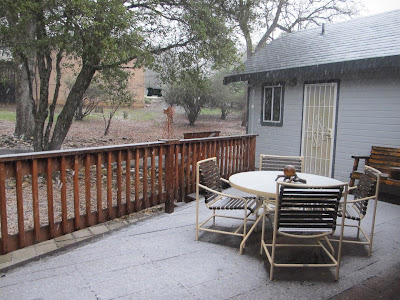 The wind was driving fast-falling small flakes, but by 6:00 it was sticking. 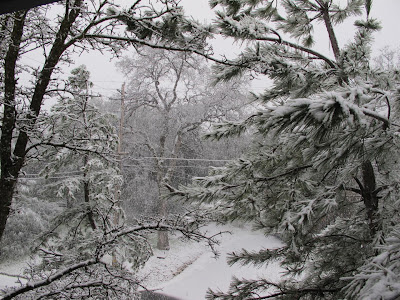 I went out to say what is probably goodbye to my First Flower of Spring. 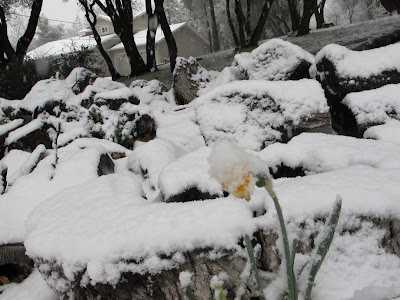 (I know. I'm being sappy about "just a flower." I get sentimental over strange things.)

We had two or three power sags throughout the evening, enough that I pulled my electric lantern out of the cupboard. The Uninterruptible Power Supply for my computer provides time to shut down when power fails and my computer monitor emits enough light to do a swift scramble before I turn it off. A little after 1:00 a.m., the power failed long enough to trigger the alarm on the UPS. After a couple of surges, power came back on, but I was spooked enough to close down for the night.

One last picture of the snow before I went to bed. Huge flakes were falling. 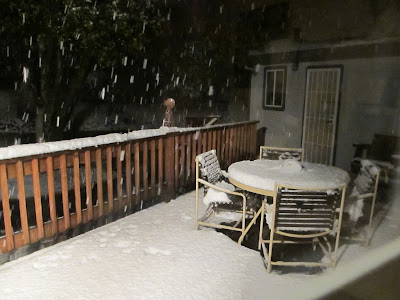 It was so eerily light outside when I turned out the lights that I went to the window to see what was happening. The full moon, although hidden behind cloud cover and falling snow, nevertheless shone bright enough that the snow-covered landscape glowed softly. My camera wasn't up to capturing this serene scene.