When my son's family spent Christmas in my little town, my granddaughter revealed herself to me as a Dungeon Master. Ashley? So sweet. So beautiful. So devious?

She mentioned developing something involving spiders. EEyuck! (Y'all wanna guess how I feel about spiders?)

I had heard of Dungeons & Dragons long ago as a topic of some controversy. Young people had gone dark places, done dark things, and talk was made of banning the game. "Really?" I had thought. Can it really be the fault of a game?

That aside, I had no clue about how it was played: cards, board, spin the wheel, computer, internet? The mental image was, of course, of gamers lurking in dark basements. You know. In dungeons.

I was at my son's house for the Celebration of Life for Jennifer when I began hearing that "the game," a weekly event, would be played on Monday evening. Dungeon Master Ashley spent much of that day in preparation, discussing with her boyfriend, who is not a participant this game group, the strategy and scoring.
﻿
﻿ As the appointed hour approached, the players began to stream in and took their places around the family dining table. They were familiar faces now, although I still haven't associated all names to the correct faces, most having wandered through on Saturday when out-of-town family was arriving, on Sunday at the Celebration of Life, and afterward again at the house.

I didn't check the game out immediately. Maybe I was avoiding the spider concept. But I eventually did check, and took a few photos of the players and the play. The Dungeon Master provides the narrative. 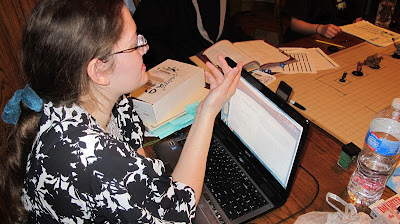 ﻿
﻿
﻿﻿
﻿﻿
After the game, some dance to the Wii and others play combat-type games on ... not sure which one. This household owns almost all game formats (except for something they're boycotting) and my grandson is now a game developer. Way back when, when I was young, and kids of friends and relatives went to work as computer game developers, I wondered how on earth they could make a living doing that. Could not have guessed. 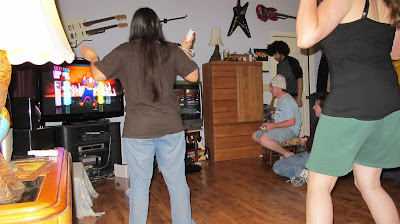 
﻿
﻿ (To compare, detritus after one of my son's get-togethers in the high school years: Poker chips, a couple of decks of cards and empty Orange Crush cans. He still likes a good game of poker.)

I'm not a game player. Solitaire is as exciting as it gets. I like sitting around, eavesdropping, with people playing games, for the sociability of it, for vicariously sharing their triumphs and losses, but I will be happily quilting. The complexity of Dungeons & Dragons is beyond me, probably would have been even at a time when my mind was more agile. I gave up on chess then. So I can't explain D&D for you, but I Googled it and have copied an excerpt from Wikipedia below.
﻿﻿﻿﻿

Dungeons & Dragons is a structured yet open-ended role-playing game. It is normally played indoors with the participants seated around a tabletop. Typically, each player controls only a single character, which represents an individual in a fictional setting. When working together as a group, these player characters (PCs) are often described as a ‘party’ of adventurers, with each member often having his or her own areas of specialty that contribute to the success of the whole. During the course of play, each player directs the actions of his or her character and its interactions with the other characters in the game. A game often continues over a series of meetings to complete a single adventure, and longer into a series of related gaming adventures, called a ‘campaign’.


The results of the party's choices and the overall storyline for the game are determined by the Dungeon Master (DM) according to the rules of the game and the DM's interpretation of those rules. The DM selects and describes the various non-player characters (NPCs), the party encounters, the settings in which these interactions occur, and the outcomes of those encounters based on the players' choices and actions. Encounters often take the form of battles with 'monsters' – a generic term used in D&D to describe potentially hostile beings such as animals, aberrant beings or mythical creatures. The game's extensive rules – which cover diverse subjects such as social interactions, magic use, combat, and the effect of the environment on PCs – help the DM to make these decisions. The DM may choose to deviate from the published rules or make up new ones if he or she feels it is necessary.

The most recent versions of the game's rules are detailed in three core rulebooks: The Player's Handbook, the Dungeon Master's Guide and the Monster Manual. A Basic Game boxed set contains abbreviated rules to help beginners learn the game.

The only items required to play the game are the rulebooks, a character sheet for each player and a number of polyhedral dice. The current editions also assume, but do not require, the use of miniature figures or markers on a gridded surface. Earlier editions did not make this assumption. Many optional accessories are available to enhance the game, such as expansion rulebooks, pre-designed adventures and various campaign settings.

Email ThisBlogThis!Share to TwitterShare to FacebookShare to Pinterest
Labels: Dungeons and Dragons, Family