A few Thursdays ago, when the weather was cold, our NeedleCrafts group was discussing soup-making. One thing I do cook from time to time is split pea soup. I had dried split peas at home, so stopped by the grocery store on my way home to pick up a ham hock, an onion and a carrot. I had a piece of celery left from my senior lunch to add to the mix.

It was too late in the day to cook a soup. Despite the package instructions, 45 minutes is not enough time for split peas. Then something came up ... I think it was the week I went to my son's house ... and my little bag of goodies sat in the bottom of the refrigerator until this last Friday, when I threw the ham hock in a big pot of water, put it on the stove, and forgot about it for a few hours. Then Sister, who had arrived in town with Brother-in-law that morning, invited me to dinner. Just as well, because I'd again been too late to get the ham off the bone and cook the split peas.

The pot got put out in the cold garage for the night and I went for Sister's good cooking, where we decided to eat out on Saturday night.

I truly thought I'd never get any actual ham out of this ham hock, but I got more than I expected when I finally got back to soup-making on Sunday.

﻿
﻿Took the bones out to the compost pile and saw something we hadn't seen in quite awhile, so I took a camera back outside to catch this patch of blue sky and a smattering of sunshine. 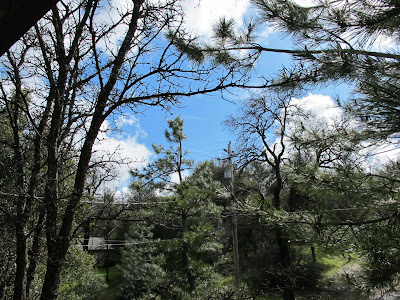 Yummmm! Except for the fact that pea soup green is an ugly color. 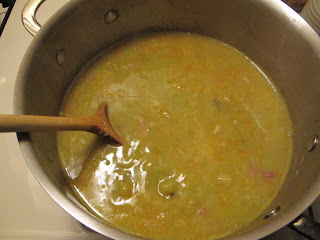 I pulled out ingredients to make corn meal muffins, obligatory with pea soup. I had all dry ingredients mixed and took a whiff of the milk before adding. Eeeuuuwww.

While on a store run, I might as well pick up mail, so it turned into an excursion. Since I'd last been into town, Daffodil Days had arrived. Local residents buy bouquets to honor someone who's had cancer, with proceeds to the American Cancer Society. 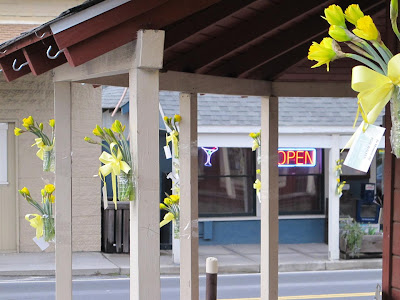 Although my late husband didn't have cancer, I usually get a bouquet in his memory on Daffodil Days. 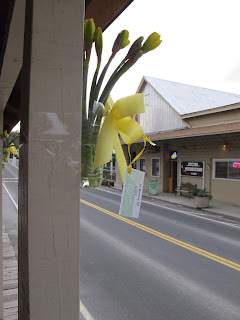 Town is very quiet on this late Sunday afternoon, as wintry as it has been this March. There'd been a good crowd at dinner the night before, but they weren't hanging out downtown this day. I heard voices in the yard of the BBQ, which has been closed all winter.  Getting ready for Spring? 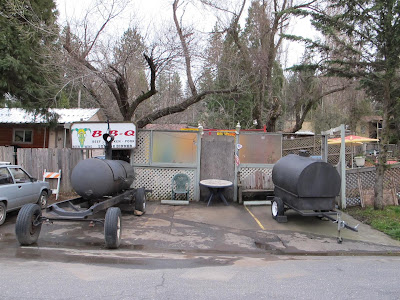 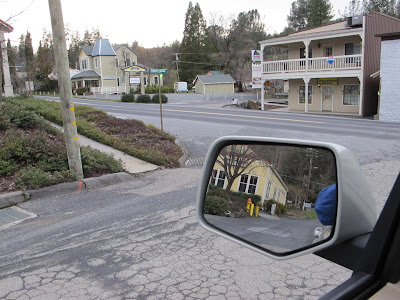 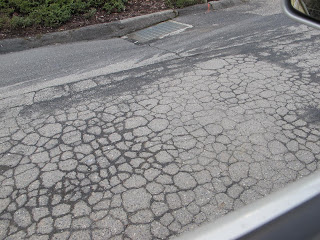 A snirt at the grocery store parking lot. Snirt = snow + dirt. Kelly Ripa is having an informal photo contest for the worst snirt in New York City. This one isn't even in the running, but it will last here for a long time. 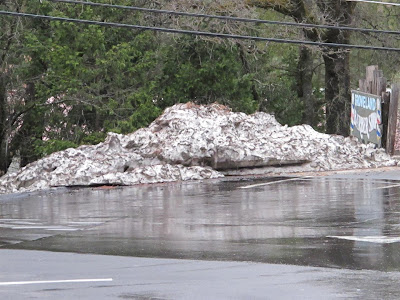 The produce racks look cheerful out front of the market. 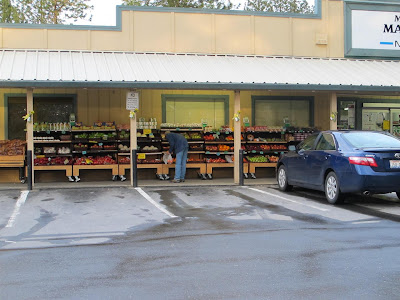 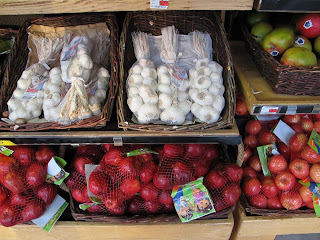 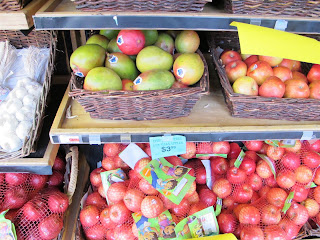 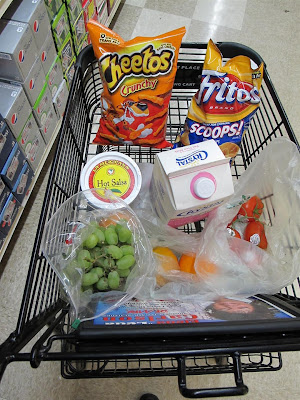 Fresh milk in hand, I mix up my muffins, also using half a cube of actual butter from the fridge as the fat source, left over from Christmas. Instructions are to "pour" the batter into the muffin pan.  Hah! 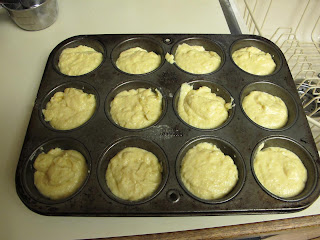 These didn't rise as much as usual and didn't have the crunch to the top that I like. 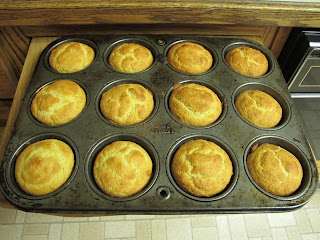 Not too much on presentation, but I finally got my good thick soup. A spoon practically stands up in it. (It's an invisible spoon here.) 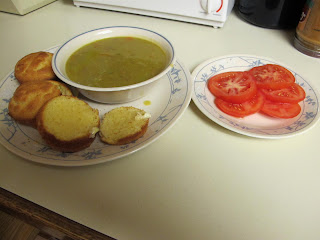 And I finished with a kitchen spilling over with strainers and pots to wash, which is exactly why I don't often cook.  I did have three meals of split pea soup this week, with four more in the freezer. The biggest pot is waiting in the dishwasher now, to get the final ham grease off that hand washing didn't touch.