First, a quick back story. My kids' dad died when my son was 12 and my daughter was 14. After the shock of it all, we held a beautiful memorial on a grassy knoll in a park beside San Diego Bay. Purely unplanned, the ceremony ended with the chiming of a carillon.

Just before that, a folk singer sang "Country Roads," one of my husband's favorites. Hearing it still moves us all to tears nearly 37 years later, made even more poignant when my son performed it at a large family reunion when he was about 16.

Jump forward to March 6, 2011. It would have been Jennifer's 49th birthday. Instead, it was the day my son chose for a Celebration of Life for one we lost on December 1st, the day before her daughter's 20th birthday. Jennifer had fragile health all her life, but pushed through so many issues, who would have guessed she wouldn't push through her most recent bout with pneumonia? It was sudden, a pulmonary embolism.

﻿
﻿
The out-of-town family descended on Arroyo Grande on March 5.
﻿ 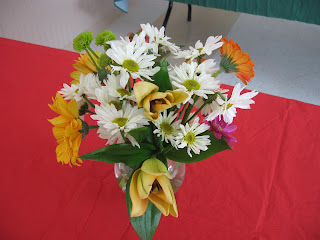 Ben asks Melissa to offer an opening prayer.
﻿﻿
﻿﻿
﻿
﻿
Ben asks friends and relatives to tell stories about Jennifer and tells his own as well.
﻿
﻿
There was a lot of good humor expressed here today, and stories about how Jennifer had touched lives. She was a giver and a healer and there was a fleet of young people to whom she played second mother. Listening to them talk about her, I felt she had truly changed lives for the better. I was there at the house for a week, and these young people streamed in and out at all hours of the day and night all week, as is their habit, and my son loves having all of them around.

Then my son finished by singing "American Pie," and as he sang his heart out, our tears came and we whispered to each other that this was our new Country Roads. 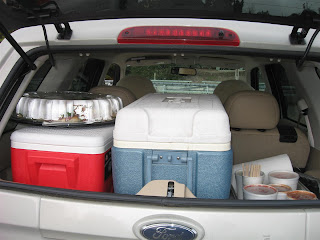