I'm tired of weather as the sole topic of conversation. We were in our own little Banana Belt. It only went down to 23° and we were dusted with icy bits of snow, of which I took lots of artsy photos as it glistened in the sun.

But I'll only regale you with one. When I looked out at the stepping stones, the ice crystals stuck to some and not others in this interesting patchwork pattern.

﻿ Today, I'm working on the little pocket itinerary book for Jeanne's May trip. I started on the cover, which basically involves locating and arranging photos related to the trip destinations.(Sample covers here.) I like to use my own photos -- no problems with permissions - but I was last in southwest France in 1959 and those slides are hard to get at! I may be using these two of mine to represent our trip extension in Paris.
﻿ ﻿﻿ ﻿When I went to shut down my computer last night, this picture was up in my photo program. Not sure why it was there, but I like it so much I'm including it, too. 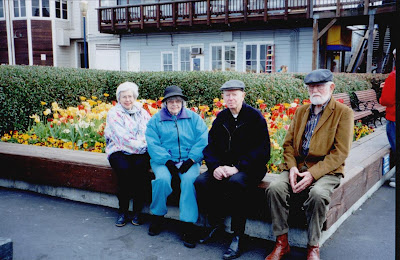 It's a picture of my aunt (mother's sister), Mom, uncle and Pop. It was scanned so it has no original dates, but I'm guessing it was taken in the mid-90s, which would put my parents in their 80s. Sometime in the past, I thought I recognized this as taken in Port Angeles, WA. Now I only remember the remembering and not so much Port Angeles. And there they were, off on a trip together, two states away from home. Wherever it was, I bet this foursome really did the town.

Only my aunt is still living.