﻿ There was the occasional drifting snowflake when I called sister-in-law Tory to offer a ride to Thursday NeedleCrafts. I have four-wheel drive. She doesn't. Not long after I hung up, I got a call from The Little House.

"Due to the weather, we're not serving lunch today."
"Does that mean you're not opening at all?"
"That's right. Closed."

I told her I'd notify Tory and that Terri and her zigzag afghan are out of town. My assumption is that Maggy the caller will notify everyone else who signed up for lunch.

A found day! What'll I do? I had an afternoon nail appointment scheduled and fully intended to walk again. But a found day!

I read email, a large backlog. I unsubscribed from email newsletters. I caught up on blogs. (Almost. The night's not over.) I took pictures of deer through the windows. 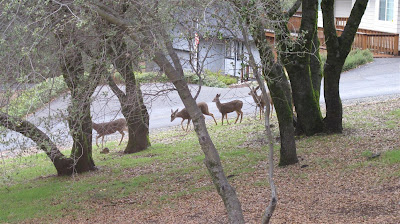 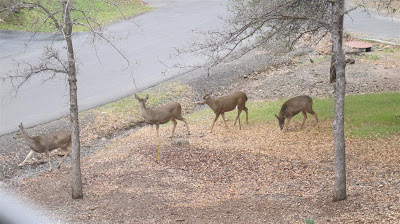 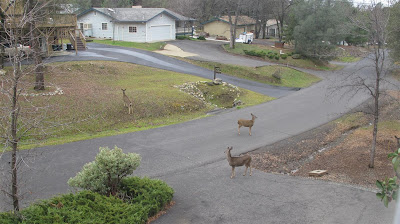 I went for nails and watched rain and snow swirl outside the salon windows. Those single-pane windows sucked the heat out of the room, and when I went outside the icy rain plastered my jeans to my legs.

Stopped at the grocery story, thinking of the phrase used by one of my husbands, maybe both, colder than a witch's tit. Probably the first one, a Vermonter.

The walk was off. No endorphin-boosting fun out there today.

It's night now, getting later. I heard the snow plow whiz by a little bit ago and the news is showing the perennial news guy, Dave Marquis, who gets to stand by the freeway over Donner Pass in the blizzard, hatless, gloveless, during shots of accidents, ambulances, snow plows charging down the highway with a following of cars, interviews with people stuck without chains.
﻿
﻿ ﻿ ﻿﻿ ﻿ We wanted winter back, and here it is!

POSTING DELAYED DUE TO POWER OUTAGE AND LOSS OF INTERNET SERVICE.

Email ThisBlogThis!Share to TwitterShare to FacebookShare to Pinterest
Labels: Weather