This was pretty much a regular Thursday with our Needlecraft group.

Tory returned from a three week visit with her sister. Is there a store in San Diego they didn't shop? She's coming along nicely with her zigzag afghan, which she worked on between shopping. I called this color "oatmeal." They said it was a little dark for oatmeal. Er, how about whole grain oatmeal? 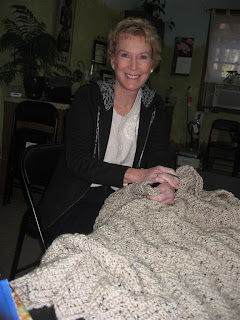 Terri wasn't here today to measure her red zigzag afghan progress. She was stumped when she left last week.

Rose is back from a six-day trip to visit her sister in Mazatlán. She said her vest would have been finished by now if she'd been home those days. 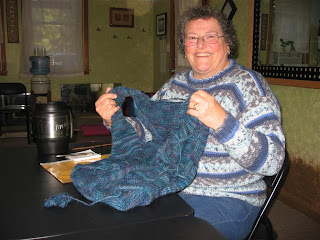 Phyllis made it in. She had shingles before the shingles shot was available. She still suffers the after effects and can't always make it. Get your singles shot!  She is knitting little squares, each in a different pattern, which she'll assemble into an afghan after she makes a whole lot of squares.

When I got home today, my house, in desperate need of cleaning, was almost done. A friend who has been cleaning for me for years has been battling cancer for nearly that whole time. She hasn't been able to work for several weeks since a particularly aggressive treatment began, so we finally got another friend to fill in for her. Thank you so much, my friends!

My toothache is returning, naturally just before a weekend. Concurrently a mysterious bill arrived from the dentist who did the "retreat root-canal" maybe six months ago. I paid a bunch and insurance paid another bunch and there's no explanation of the amount billed besides "new account balance" for transactions between 08/13/01 to 01/03/02 on one page, and on another, for services rendered January 3, 2002.

Tonight's newspaper carried some terribly sad news -- the husband of one of the young women in Soroptimist was diagnosed with pancreatic cancer two weeks ago and died two days ago, at age 46. I went through the experience of suddenly losing a young spouse many years ago, and my son lost his young wife just over two months ago, so I know her sorrow and send my well-wishes to her and her family.