Black Kitty has lived in the neighborhood for years. Consensus is that he was abandoned, along with several other cats, when a neighbor moved out. I saw him wandering for several of those years before I made his acquaintance. He's a nice cat, but an unneutered male. I discovered after housing him in the garage on some below-freezing nights that he has the bad habits of an unneutered male. He's so starved for affection that he grabs at you with his needle-sharp claws when you try to move away from him, which non cat people have mistaken for aggression.

He likes to be brushed, but I don't handle him often, as my kitties are little purebred hothouse flowers and Black Kitty is out there exposed to who-knows-what and I don't want to transmit disease to them. Henley and Jean Luc are fascinated with him. Chloe hates him and I think she takes out some of her agitation on Jean Luc. He could not be integrated with the lifestyle of these indoor cats.

Several neighbors put food out for him, me included, when he comes around. Recently he's been bringing a little girlfriend with him occasionally. She seems young and is quite wild, but so ravenously hungry that she pounces on the food dish as soon as I close the door.
﻿
I don't mind sharing the feeding of Black Kitty and even his little friend when she comes around, but I don't want to become known by all the stray cats in town as the soft touch. When Black Kitty doesn't empty the bowl fairly quickly, I can tell it's been cleaned out by others. Used to be lots of mud showing up in the water bowl and muddy raccoon footprints leading to the food bowl; now I mostly see snout hair and slobber from dogs, which are not supposed to run loose.

This guy has come around a few times, giving me this nice expectant look. But he looks well-fed and well-groomed, so I believe he has a home. I tell him politely to go talk to his own mommy about food. 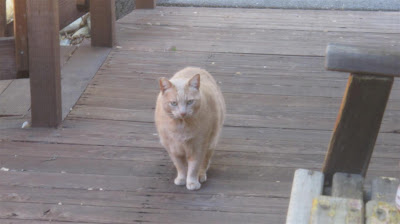 The dogs I try shrieking at in a volume that should shatter eardrums. If I were fast enough, I'd get my squirt bottle to chase off the sticky-pawed critters, but it's too hard to get out the door fast enough. I'm accurate to about 20 feet with a squirt bottle, however. Even with a moving target.

(Sorry, Sue. Wal-Mart is too far away for all those trips for critter food.)

Yesterday I was made aware of some two-legged sticky fingers. Angie, who takes care of my yard, says to me, "Did you see five of your rocks are missing?"

"The ones out at the edge of the driveway by the street."

Starting by the street, river rocks cover the slope leading back along the driveway behind my house. There are some really big ones, more than a foot in diameter, placed at the bottom of the steepest part, then graduated in size as they go up the hill and as the slope lessens closer to the house. Vast supplies are available in areas where hydraulic gold mining took place, not all that far from here. However, they are heavy, so transportation is an effort and an expense. My husband and I had hauled all but the big ones ourselves many years ago.
﻿
﻿Angie took me outside to show me. The rock area is mainly covered in oak leaves, so it wasn't immediately apparent to me, but she blows leaves among the cleanup tasks and knows where every bump should have been. She began brushing leaves aside to reveal the concavities of the earth underneath where a rock once was. As she scanned up and down the driveway, she found more than five big ones missing. Many smaller ones along the edge are gone, too. Somebody has clearly been snatching my rocks, which will allow mud to wash down on the driveway.

I hate it that I have no view of this area of my yard from inside the house, as well as several other areas. I've thought of putting security cameras outside as spooky things sometimes happen. (WARNING, adult language ahead) I'd like to put up a sign for sticky-fingered two-legged critters that says: "Rock thieves . . . fuck off!" But I haven't got the nerve.

Here are two resident cats stretching the intent of cat blankets on the bed this morning. 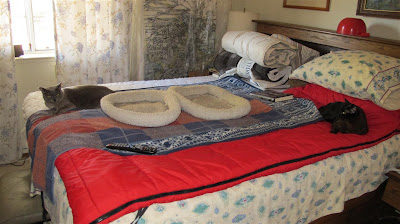