It's been an odd limbo in between the time the power went out last Thursday midnight and, well, now ... late Monday evening. I don't know whether it was hectic or blah.

I wasn't ready to go to sleep at midnight when the lights (and furnace) went out. They'd been flickering throughout the evening, and I'd been expecting the failure. The UPS (uninterruptable power supply) my computer is plugged into began to beep its warning. (So glad I got the UPS!) I probably had 20 Windows open, which I closed systematically, with enough monitor light left to find a flashlight. Called PG&E, which sounded like this was news to them. Flashlight led to battery lantern and battery lantern (eventually) led to headlamp so I could put the kittens to bed in their room, then read a book under cozy blankets.

There was a strange noise, like something hitting my bedroom window, which startled Chloe-cat and me. Looked out the window, but couldn't see anything in the slender beam of the headlamp.

Kitty and I eventually went to sleep. At around 4:30 a.m., my bedside light popped on, the furnace swooshed to life and I had to go to the living room to turn off TV and lights for the rest of the night. I left the heat on to do a little catching up.

Then morning came and I looked out the window to see heavy wet snow and broken tree trunks and branches everywhere. I put my call in early to my tree guys, who cleared the blocked portion of my driveway and will return later to finish clean up.
﻿
﻿﻿
﻿﻿﻿ ﻿
﻿﻿﻿﻿﻿﻿﻿﻿ ﻿﻿﻿﻿﻿﻿﻿﻿
Now, by Friday with my day freed up, power back, TV working on antenna, and a trip with Tory to Modesto postponed until Saturday, instead of feeling like I had a "found" day, like I had on Thursday, I fell into a major slump. I couldn't even stay awake in my chair while watching TV.

Saturday morning we woke up with even more snow, so again postponed the trip to Modesto until Sunday. This was a beautiful snow, and I can't resist posting several of the many photos I took that morning.
﻿ ﻿﻿ ﻿﻿﻿ ﻿﻿﻿ ﻿ 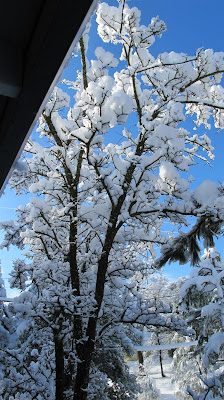 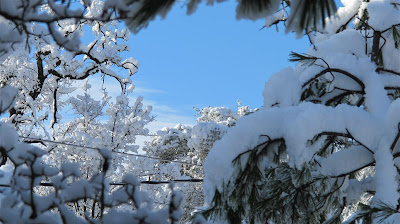 After that I dozed off all day again, until I finally pulled myself together for a late afternoon walk. Before I went out the door, I took a quick look at my cable modem, intending to put in an end-of-the-day call to the cable company for a progress report. Surprise, a steady column of green lights greeted me. Internet was back.

The sky had clouded over, making more snow look like a possibility. This gnarly old oak, silhouetted against the gray sky, had lost a huge branch in the storm over Thursday night. 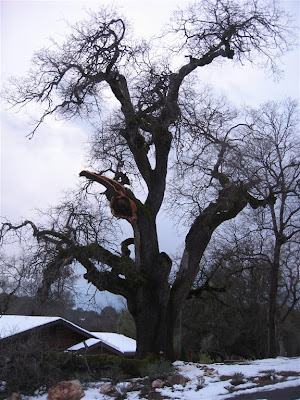 ﻿ ﻿
Friday night's storm had been deeper but lighter, without doing apparent damage. I did spend a nervous Saturday a.m., however, watching snow shake off branches hanging low over the propane tank. Then Saturday evening, I finally got back on line.

Email ThisBlogThis!Share to TwitterShare to FacebookShare to Pinterest
Labels: Snow