The Boys Are Back

Sometime after the most destructive part of last weekend's storm had passed, Sister-in-Law Tory joined a conversation with my Next-Door-Neighbor and another shopper at our little market. N-N-D asked Tory whether I'd seen the big tree down in the Neighbor-on-My-Other-Side's back yard.

I hadn't seen it.

The lady, Angie, arrived first on Tuesday morning, to clean. I was ensconced in turn at both computers, while receiving an unaccustomed number of phone calls. I got into deleting software from the old computer, in preparation for finding it a new home, and mistakenly deleted my printer driver, which took the printer down for the network. Ah, well.

The tree guys showed up early in the afternoon with The Terminator, to follow up on the initial tidy-up on Friday. 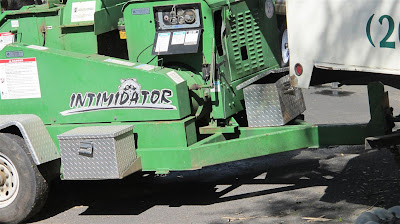 Steve reported more damage out there than his earlier assessment, and he took me on a walk-around. At first glimpse, the big tree down that Tory had told me about looked like it was indeed in NOMOS's yard, but when we lined up the survey posts we could locate in the debris, it was ... oh, oh: My tree, neighbor's yard. 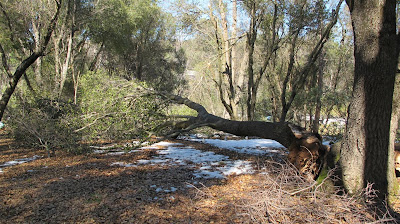 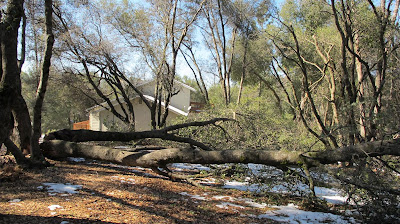 I decided by the end of the day that the 3rd and 4th trunks of this multi-trunk tree must also be taken down, before the next predicted storm, as they could domino other trees onto my house. 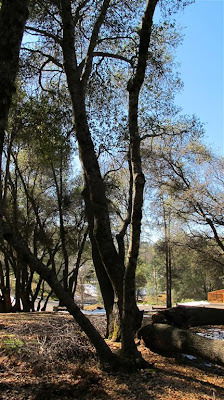 The Terminator chewed up all the original fallen branches, and one of three other precarious trees was dropped. The two remaining trunks of the four-way tree were shorn of leaves and major branches so they would be less likely to topple.

﻿﻿﻿ ﻿﻿ The guys had to go to another job late that afternoon, but left the Terminator behind.

Bright and early today the guys came back. Two more trees were felled and bigger trunks went into the Terminator. And then this phase was wrapped up so they can get some other critical jobs done. There is one final day remaining to finish up, to take completely down the last two of the foursome, and clean up the trimmings. They need to bring in a Bobcat to haul that heavy stuff out out.

To finish off the day, my old printer, whose driver I had restored, sipped an ink tank dry and said "no more printing." Since I'm not buying it any more ink, I had to do an ad hoc, non wireless installation of the new printer.