Have you ever watched one of those police car chases on TV and, just for a moment, the fantasy flashes through your mind that it would be a hoot to try to outrun the police?

Well, read this story from myMotherLode.com:

Last night, San Andreas area officers tried to pull over 83-year-old John Smith* for a mechanical violation, and he failed to stop. At one point, officers flattened all four of Smith's tires with spike strips near Angels Camp. The chase continued into Tuolumne County, despite Smith's four flat tires, and Sonora Area CHP officers took over on Highway 49 at the Stevenot Bridge. Officers used a PIT maneuver, striking the rear of Smith's Jeep, causing him to spin out. The chase ended at 10:04pm on Highway 49 north of Reynolds Ferry Road.

"Mr. Smith was charged with felony evading," says Officer Mike Remmell. "It was determined that Mr. Smith was not under the influence of alcohol or drugs, but a possible medical or age issue was the reason for the failure to yield."

Based on Smith's  age and past medical issues, he was released to his family members.
* Pseudonym provided

What was he thinking? you might ask. Maybe he thought this could be his last chance to live the dream? One commenter on the article must share this view: "...or it was on his bucket list. evading police, check-. ..."

The Last Glitch from Last Night

When I said my American Express didn't have any complicated entanglements, I forgot about PayPal. Easy, I thought. Just go to PayPal and delete that credit card as a method of payment.

No matter how many time I hit "delete," it keeps telling me, "You may not remove your funding source while an authorization is still pending."

Hunh? I want to find out what this pending authorization might be (I'm really hoping not Eurotunnel), but have you ever tried to have conversation with Virtual Agent Suzy? Talk about a dog chasing its tail. This is NeedleCraft Thursday. There is no time to wait on hold during EST business hours. Oh, the new credit card arrived today. "Next Day" service only took two days.

Speaking of  NeedleCraft Thursday, there was a professional photographer (or an amateur with a really good camera) taking pictures of the various groups meeting at The Little House today, for use on a new website which is being developed. Anyone who intentionally made a weird face will have his/her picture posted. (Just kidding. Or not.)

Terri did a double-overlapping crochet stitch when she should have taken one step back and shaken hands with the person on the right, thus warping the zigzags on her afghan. (Catch my technical crocheting jargon.) Before today is over, Ursula should have her straightened out. 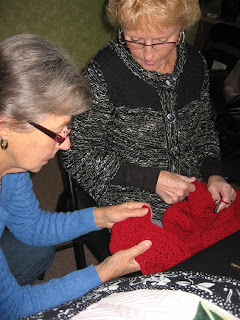 Today at the senior lunch, three desserts were served (this is an exception to normally nutritionally sound menus): chocolate chip cookies, which some of us treated as an appetizer, apple crisp with whipped cream that seemed to be the real product, and these chocolate cupcakes with ice cream that Mary Brown made to celebrate the birthday of one of the men at lunch. Yum. 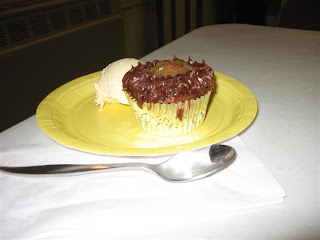 I had a meeting later in the day, so stopped at the library to fill the time. What a beautiful day; almost warm, no cars coming either direction when turning left out onto the highway. I'll describe to you sometime how much those of us who stay here year around love our peaceful winters.
﻿ ﻿﻿
﻿
﻿ ﻿﻿
﻿﻿
﻿﻿﻿﻿﻿﻿﻿﻿ ﻿

Terri asked for my blog link today and called me this evening to comment on Mom and Dad's depression-era frugality. She cleaned for them many years ago and told me about going into the kitchen one day to find the box of corn flakes tipped over on its side and corn flakes scattered over the counter. "Shall I clean this up?" Terri asked. "No," said my Dad, "we're waiting for the ants to leave."
Dad was a kidder, but you never know ... ﻿
﻿