My ongoing project -- until it’s done -- is to put together the gift "Santa" brought me for Christmas. It’s a new computer with nifty bells and whistles. Thank you, generous Santa (my savings account). New computer is currently set up on the dining room table, linked by wi-fi to the old one still in my study. I’m using a patchwork of methods. It’s a slowish process and most of my friends and relatives enlist the computer guru in their lives to do something fast and slick.
But old computer has been a good friend for eight years and is the repository of gems among junk. I can cull the junk and keep the gems if I do the sorting and moving. I’ll know exactly what’s up-to-date and what’s been moved. I can delete data and programs from oldie and update programs staying behind. It is, after all, a perfectly good computer and can have a productive life with someone who doesn’t need to back up 1000s of photos with USB 1.1, or drag out camera cables every time he/she wants to upload a photo (nice little SD card slot on the new one), or who won’t notice the few extra beats it takes to cruise the Internet.
So looks like I’m something of a geek, but probably because I’m a control freak. I just don’t want to have to call a guru because I don’t know what’s with my computer.
Complaint seen on Facebook: the profile photo thumbnails and print are getting smaller and smaller. 100%.  Even on this large screen computer. 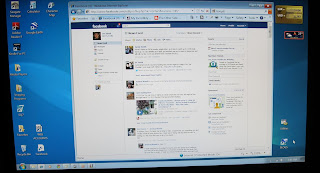 A cat, most likely Chloe, enlarged this Facebook page for me yesterday. 1000%.  A little larger than I can really use! 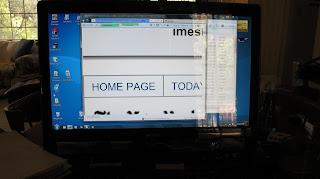 Jean-Luc just chased Henley on a circuit of the house. Henley sticks to the floor, but J-L has an ambush mentality and takes short cuts over the top of the couch, across the coffee table, bulldozing magazines and newspapers off, up over my comfy chair, into the kitten room (yes, they’re exiled at night so Chloe can let her guard down), down the hall with a round through the bedroom and/or study. Then again.
I’m ecstatic, because last night I held Jean-Luc and cried, afraid he wouldn’t make it through the night. He and Henley both slept between my legs on top of a towel, me mostly sitting up for the short night. If he wasn’t dying, I think he wished he would, as bad as he felt. In the morning, he looked better. And tonight, he’s chasing Henley. :-)
See you tomorrow.
Posted by Lee I at Sunday, January 09, 2011