I just wrote a big check to the IRS for 4th quarter taxes and I’m feeling cranky now. I would rather be spending it on a future trip.

In the realm of trips, my Tucson daughter and her husband arrived home during the night from a trip that started Christmas Eve. She emailed me by phone, from the back of a shuttle van between Phoenix and Tucson that they were back after a 27-hour trip from Madrid to Tucson.

It began in Marrakech ... Morocco was her husband’s dream; she had little interest in it, but his excitement in the course of trip planning was contagious. (He threw in a few days in Paris at the end for her!) We had a phone conversation this afternoon hitting some highlights, but I’ll get to see diaries and pictures later. 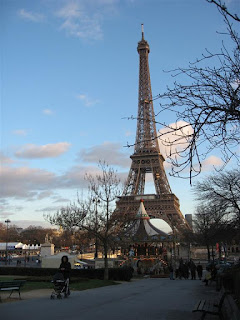 After brief culture shock as they pulled into Marrakech, jet-lagged, she was drawn into the history and culture of a place that has been continuously inhabited for centuries by waves of peoples. They hiked, they went to the sea, they went to Tangiers, and she came away loving it and a big promoter of visiting there.

Then they went to Paris to bring the trip to a finish. Paris is a city for walking, and walk they did. Her husband even urged her to walk (climb?) to the top of the dome of Sacre Coeur; guess the view from part way up the Eiffel Tower wasn’t quite good enough.

So she’s back in Tucson, glad to be home, upset about events there. She knows Gabi Giffords, which I was not aware of. I’d been emailing her about events but they’d been in touch with the news via CNN wherever they went.

Thank you, daughter. Recalling your enthusiasm has buoyed my mood.